Interface design and other forms of design

Design makes it possible to transform an idea into reality. And that can mean many things of course: From the layout and graphic arrangement of elements, colours, shapes and styles to the designing of the man-machine interface. We talk about design or databankdesign (see development) when we grapple with the conception of an API.

To us it means the organisation of interactive processes like website, software, interactive systems, iPhone and iPad Apps but also in moving images and media communication.

textfreiraum is a editorial agency, that takes the liberty to write articles, features and commentary independently as possible. We were invited to design their new internet appearance. Because textfreiraum lives and breathes through text, we had to find a layout that leaves a lot of space for the various texts.

Similar to the development in the nineties, when the internet became more and more important due to the spread of PC`s, mobile access to the internet is now coming to the fore. Even though Apple`s iPhone only enjoys a relatively small share of the market, it does -along with Google`s Android- dominate mobile internet traffic.

This is because the iPhone and Android achieve a fairly good display of regular internet sites that are not optimized for mobile internet thanks to Webkit. That is not the case with a lot of other browsers.

depage.net displayed on the iphone

Because the iPhone is currently the most important and best known mobile device we have decided to optimize depage.net and depagecms.net for display on the iPhone.

Reading? On the internet?

We read an awful lot of things on our computer displays: emails, news, blogs, encyclopedias. But literature on the internet is still being treated with neglect (although there have been some attempts in this direction).

The sites that are moderately successful often belong to the fan-fiction genre that is generally not taken serious by the established cultural scene. As far as its literal value is concerned this may be spot on, as a social phenomenon though it should be taken more seriously.

»Die Zeit« recently complained in a dossier that not enough people read and that reader competence is dwindling. According to »Die Zeit« even books by Astrid Lindgren have to be simplified so that they can be read in certain schools.

One can take this seriously or one can rubbish it as exaggerated and a form of cultural war that has always been fought in some way. Alternatively one could just do what might be the most pragmatic and sensible thing: Read and write, develop ones language skills and ideally have a positive influence on others.

It's always the same.

immerdasgleiche.de is my own modest attempt to get people to take their time, to pause for a moment and to read and reflect upon “real language”, not only information that is easily digested.

The texts: most of them short (I call them »shorties«), some of them of medium length (e.g. »Das Hospiz«).

The layout: As simple as possible, black and white with a discrete navigation, completely scalable and with special print style sheets so that the texts can be printed out comfortably.

Pop-Up-The-Bathroom was about visualizing 10 trends in bathroom design. This project was developed in connection with the ISH on behalf

of the VDS in collaboration with FAR_consulting, Karsten Jipp and Verena Landgraf.

Verena Landgraf had illustrated the 10 Badtrends using individual pictures. Based on this illustrations, we had to design and implement interactive application for the internet with a different view for automatic presentation at the ISA.

In order to give more space to these illustrations based on 2 dimensions, we decided to convert these spaces into »quasi« — a kind of — 3D.

Because of the shortage of time it would not have been possible to use a proper 3D implementation, and what is more it would have destroyed the two dimensional character of these illustration.

The following trends were illustrated:

I had the privilege to design the cover and booklet of alony's new album Dismantling Dreams. 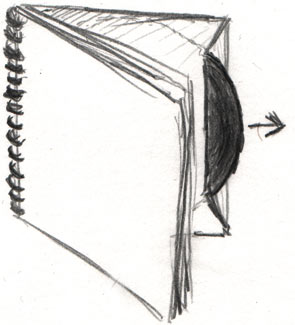 At first we planned the booklet as a »little book«.

Originally the booklet to the CD was conceived as a small book which — parallel to the music — was meant to take the listener on a small journey to another world (Dismantling Dreams). The listener should experience the music on several levels. Each song was the basis of a different level.

Each level should be experienced as a new space which forms the framework of an individual »narrative«. The booklet was a stepping stone to an optical and haptic experience. Therefore it was important to us that the booklet was something you could touch and sense and could be perceived as a real object which you can hold in your hand or place in front of you.

There are two reasons why this is important to us:

We live in a box.

Or better — we are living in a number of boxes. Small and big, open and closed, some of them have holes, others are dark like in a »maulswurfshügel«.

One of these boxes is my computer. It has a small hole through which one can see the world — it is something people call the world wide web — but when you think about it, it is just a number of other boxes you look into.

Everydayisexactlythesame.net is an attempt to visualize my own box. Every five minutes a screenshot is automatically taken. And at the end of the day an average picture is computed for the respective day.

Here an example for the average picture of January 1st, 2009 — a day I was busy with Flash (animation) and engrossed in several websites but still found the time for a game of The World of Goo.

Graphically, it would not get you very far if you just took an average picture — all you would have is a rather vague grey — that is why several versions of the same picture are calculated: