Anything that turns out to be exciting.

Media, the moving image and visualization: All are a part of design.

They may just reach out in one direction — like videos or trailers — or may be of an interactive nature.

This is the ultimate in design as it incorporates concept, designprocess, the development of software and experience. That is why we are particularly interested in this form of design as it encompasses several levels.

For the same band, that we already had the privilege to do the packaging for, we have now created a video. The video is based entirely on photo material and on the illustrations that were already used for the booklet. The animation was implemented in flash and then exported as a video. 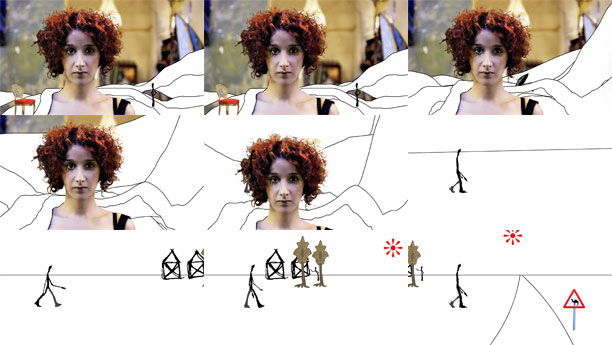 The video starts with a 16:9 variation of the cover photo of the album. Then the illustrated dream elements come to life, a white surface replaces the “real” background and the “protagonist” of the video sets foot in the dreamworld:

She has some encounters with other characters (a neighbour, a man who is giving a child a good telling-off, a few camels, Oscar's tin drum, the love of her life whom she has to leave behind with a heavy heart, ...). On the way she falls over a few times until she finally learns to fly.

Pop-Up-The-Bathroom was about visualizing 10 trends in bathroom design. This project was developed in connection with the ISH on behalf

of the VDS in collaboration with FAR_consulting, Karsten Jipp and Verena Landgraf.

Verena Landgraf had illustrated the 10 Badtrends using individual pictures. Based on this illustrations, we had to design and implement interactive application for the internet with a different view for automatic presentation at the ISA.

In order to give more space to these illustrations based on 2 dimensions, we decided to convert these spaces into »quasi« — a kind of — 3D.

Because of the shortage of time it would not have been possible to use a proper 3D implementation, and what is more it would have destroyed the two dimensional character of these illustration.

The following trends were illustrated: